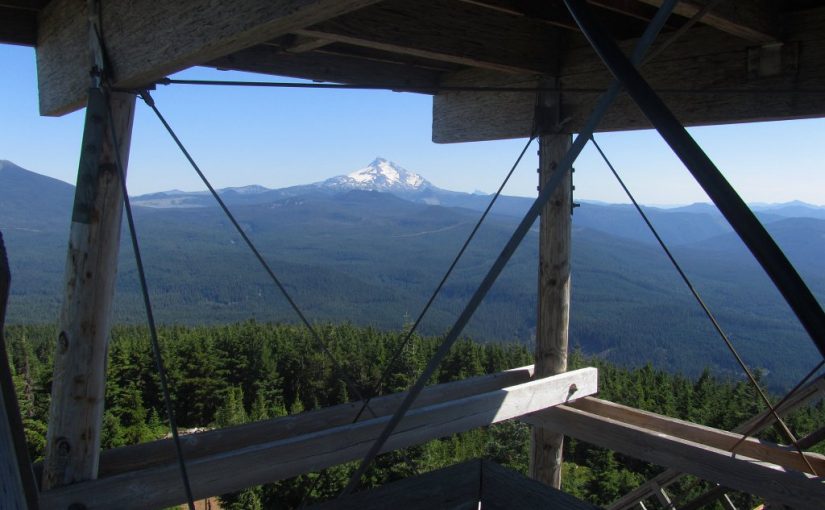 We went out this weekend to do a campout and a hike of Sisi butte. I had a desire to return to the place I watched the total eclipse last year and we want to do trail backpack campout. So we restricted what we took to what we might fit in a pack for a backpack with a couple of exception like chairs. We set up camp and then headed up to Sisi Butte for a look around. This time I could get up on the lookout tower and had a great view. We returned to camp and made dinner.

So around this time I went down to check out where creek would run but was now mostly dried up. I found tracks of a small cougar. So at that point Lori had a change of mind about sleeping in her tent (some people just big cat people). So she retreat to sleep in the car. I turned in and watched the mosquitos collect on the outside my tent. At some point during the night I woke shivering. I started adding layers and pretty soon had almost everything I brought on and was still cold. I mange to make it through an uncomfortable night and at day break I was out of my tent waking up and down the road to get warm. Lori also had a cold night. The forecast was for night-time temperatures of mid forties. When Lori checked temp on the car sensor it was 30 and I found a little ice in the water bottle. We brought gear for mid forties and not freezing!

So we decide the fun factor was gone and instead of trying to do breakfast at camp as planned we would bail and head down and find a breakfast place at Detroit Lake. So we tossed everything in the back of the car, cranked the car heater to full and head off for hot coffee and a real breakfast.

We stopped off at Summit Lake Camp to see how busy it was.

I found my stop and started setting up my tent.

Tent is up on a pretty level spot.

I thought I was all set for sleeping but the down bag was just not warm enough for freezing temperatures.

Lori got her tent set up but it would be a lonely tent.

Rocks to cook on but no fire because of dry conditions and no fire rules.

Gate at the start of the road to Sisi Butte.

We walked a rocky forest road up to the top of the butte.

The road was more in the sun then I remembered. It felt about 80 out at this point.

Sisi Butte Lookout from the road.

View of Mt. Jefferson on the way up.

View of Olallie Butte form the road on the way up.

We thought this me be the water source for the old lookout.

As you come up the road these are the first buildings you see.

Sisi Butte Lookout tower. It was build in 1979 to replace the original tower.

Stairs up to the viewing area.

You could make it the stair to the upper platform.

Mt. Jefferson view through the tower.

Looking down the west side from Sisi Butte lookout tower.

There is a second butte about the same elevation as Sisi Butte but no trail to it.

Heading back down the stairs.

A view of Mt. Jefferson on the way down.

A snow melt fed creek it was dried up but still some mud to show cougar tracks.

I want to try my stove cooking a meal that need to be simmered in a pot.

Not ready yet. It is to be chicken and rice.

It was still wet enough in the creek bed to have flowers.

First place we came to was the Cedars Lounge in Detroit. Big cups of hot coffee.

The waitress put us in the bar as it was the warmest place.