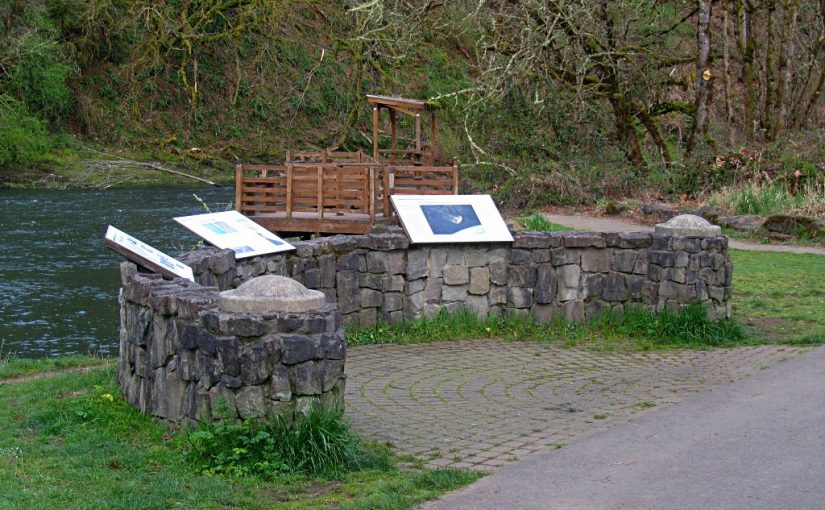 I got out for a Sunday drive to see two local parks that a show talked about showing the Ice Age Floods. The first place I went was to Fields Bridge Park in West Linn. The program I saw talked about it having information on Missoula Floods. It did have a little information about the floods but more in context to how they rafted in the Willamette Meteorite, the largest meteorite found in North America, to place near this location. I walked around a little park area to the information signs that talked about these events. Looked like someone got some money to commemorate the Willamette Meteorite and this was the land that was available to put it on. They had some big rocks that they said were erratics from the flood but they looked like Columbia River Basalt and not rock from the Rocky Mountains.

The next place I went to was Graham Oaks Nature Park by Wilsonville. The program I saw, that was several years old, talked about it being the traihead for the new Tonquin Trail. The Tonquin Trail was suppose to show the effects of the Missoula Floods and run for many miles. Looks like all that has been done was to put the name on a couple of miles of trail in the Nature Park. The Nature Park’s purpose is to bring back a small section of the Oak savanna that once covered the Willamette Valley. It looked like they have made a nice start on the idea but it will take a couple of generations to restore what was lost. The Nature Park is in the middle of new subdivisions so it mostly makes for some nice walking tails for the locals. At least they are keeping the black berries under control.

So not much good geology at either of these locations.