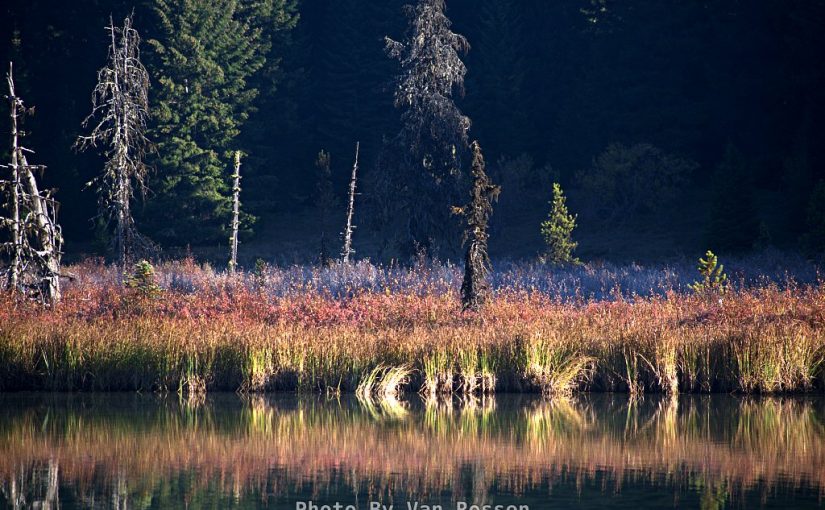 Running out of nice weather for this year I headed out to do a campout that I have been wanting to do all summer. I head up to Mt Hood National Forest with the idea of driving the Skyline Rd. to Olallie Lake with some stops along the way. I first stopped off at the Historic Clackamas Ranger Station and then walk back to see what had happened to the wooden walkway that lead to Clackamas Lake. As I feared the walkway was never replaced but folks pounded in a user trail to the lake. The lake was beautiful. I next headed up to Summit Lake and ran into a couple of guys and found out that that day was the first day of hunting season. That ended my desire to go to Olallie Lake as in the past I have found it loaded with hunters drinking beer. I did try to get up to one more spot that was on my original plan but found area that where the springs that feed Warm Spring River full of hunters so I turned around. I decide that Clackamas Lake was so nice I would camp in that area and photograph the lake and hike around the area. On the way back I did make on unplanned stop to check out Dry Springs. It lived up to its name being dry of water but full of trash. Also got a side trip into Timothy Lake to see the new boat ramp was never put in.

After finding a good campsite in the Clackmas Lake area I did a hike up to the Headwaters of the Clackmas River and found it underwhelming. I then did some late afternoon photographing of Clackmas lake. After a chilly night and morning I did some photographing of the lake and frosty surroundings. It had been over a year since I had picked up a camera so this was more a relearn how my Nikon worked than getting great photos. I finish the trip by stopping off at Little Crater Lake. I was happy to find the water at the lake clear as earlier in the year it had become cloudy. Then a long drive home.